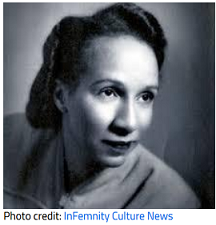 Shirley Graham Du Bois was an Oberlin alumna, composer, playwright, biographer, nation builder, and activist. She was one of the first black women to stage an opera in the United States and one of the earliest black women musicologists.

She entered Oberlin College in 1931 to study music, receiving her BA degree in 1934 and completing her master's degree in 1935. Her thesis, "The Survival of Africanisms in Modern Music" argued that European music was influenced by African music. In 1932, while still a student at Oberlin, the Cleveland Stadium Opera Company premiered Du Bois's three-act opera Tom Tom before a weekend crowd of more than 25,000.

This symposium is sponsored by the Gertrude B. Lemle Teaching Center, StudiOC, a grant from the Andrew W. Mellon Foundation, Dean of the College, Dean of the Conservatory, History Department, Oberlin College Libraries, Africana Studies Department, and the Theater Department.